In the midst of all that’s wrong with the world NC gov. Pat McCrory passed this law. IMO this is him basically saying the less we know the less we complain.

This cop is one brave soul i was scared for him, as of late the police have been the aggressors but in this particular situation this rookie cop holds his cool longer than most could.

I have lost track of how many of these stories i have posted just this week alone smh. This was a sting operation to buy guns from Eric Harris by the police he notices he is being set up just watch what happens after.

Cop waiting for him to come to the car

This seems like it’s routine these days very sad but true. Watch this with your own eyes and make your own assessment.

An African American male was leaving the Dollar General in the neighborhood he resides and he turned his car on and a lady by the name of Janelle Ambrosia started curing him out calling him a nigger but that was only the beginning. You must watch this to believe and see how much hate this woman has in her heart. She threatens to assault, kill & have her husband beat him up and also that she strips for a large amount of the police department allegedly. After this went viral she took to Twitter and made some even more incensitive statements. 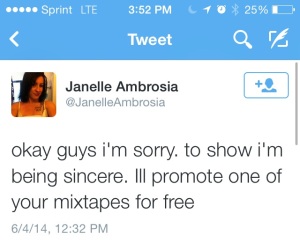 This is a sad story but doesn’t suprise me racism is alive and well in our country still after all we have been through people still have so much hate in them. By the looks of this situation this town doesn’t have many minorities I hope someone is charged with this crime and pray for his wife & kids.

This is why we the people don’t like the police you see things like this all the time these days.

This film has already won a few awards at the Sundance Film Festival but is out today in select cities check your listings. This film should be powerful i am looking forward to this. If you’re not familiar with the case google Oscar Grant.

Check this recent video I came across these police are out if control they are doing as they feel an getting away with it.

Here is two videos from the protest that has been going on now for 3days. We need to continue to spread the word and get #justiceformichaelrandolph

After school on September 29 officer Jason Ammary tased a 14 year old Dieruff High School student as she was walking down the street with her friend. The Police claimed they told them to leave the street some listened, but others remained in the middle of the street. The officer approached the girl and two of her friends to get them to move he claims she began to curse. The officer went to arrest her for  disorderly conduct, but she twisted away from him so he had to lean her against  a car to place cuffs on her then she elbowed the officer in the chin and kept hitting him, so he backed up and used his Taser. Luckily this video was captured from City surveillance cameras which you can see above shows quite a different story so he has some explaining to do. This police brutality needs to stop they bully people and use excessive force when they feel and continue to get away with it. This officer is done he might as well hand in his badge if he hasn’t yet.