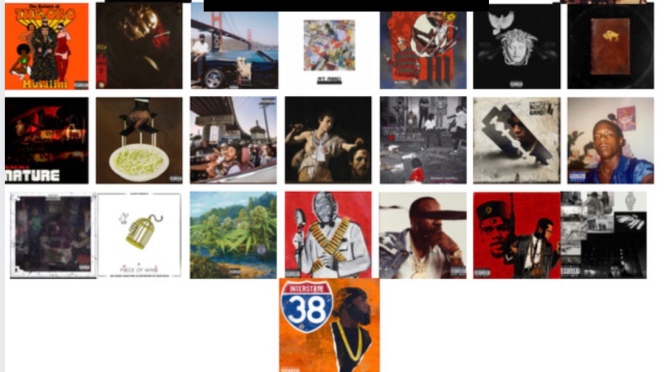 As a fan & writer I enjoyed and appreciated all the hard work put in this year. At a time of uncertainty these guys kept their foot on the pedal an dropped tape after tape to build up an audience while the mainstream artists sat around or started DM’ing artists in a paid song placement scam( 😆 ). With no further ado here is my list.

This was a dope introduction to the world for SGC. From track one he catches your attention with his delivery & wordplay no skips on this project. Everyday it felt like I had a new favorite song. Roc Marci blessed him on the production as well. It’s crazy to think this project had no features & was from an artist fans weren’t really familiar with at the time an still blew up the way it did.

Favorite Song: Hate To Love It

The old school samples & scratches throughout along with movie skits was well used. This is an album you can turn on an just let it play from start to finish.

Che & Apollo together sounded like a well oiled machine. Loved Anti-Social she did a great job of telling us about her upbringing. Che is in a lane of her own with the quality of music she is puttin out. She went 3 for 3 in 2020 an ended the year producing her most recent project “After 12”

The title & timing of this was well needed. WTD floats all over this one showing why he one of the best out in his lane.

Solid collab right here from Spesh & Rasheed. This one made me a fan and started off a nice year for Rasheed from features to his year end project with Buckwild.

Favorite Songs: Based On A True Story , Inglorious Bastards, JD’Revenge

I picked this series as a whole because stone cold said so! I’m a huge Ran fan since Way back on the early clue tapes, Pain & Glory etc. so you know I was looking forward to hearing him back in the booth. He didn’t just return he kicked the doors down an turned into one of the top guys in the game in a short time. Deleted Scenes & Crime Scenes was both dope as well. Ransom & Nicholas Craven together is a blessing to true hip hop fans ears.

Benny gave us a different sound & showed he could not only rap with the best of the underground on songs like “Over The Limit” with Dom Kennedy but also do it on a mainstream level on “Timeless” with Big Sean & Lil Wayne.

The Dark Side Of Nature – Mav x Rob Gates

This is one of my favorite Big Ghost projects. This gives me that grimy 90s rap vibe as Gates & Mav go back & forth bar for bar. Da Cloth OG’s & Ghost delivered a dope project.

Vic’s pen game needs to be appreciated. The fact features on here include Ransom, Che Noir & Raz Fresco to name a few let’s you know this is some Rap RAP. This project’s smooth production did it for me some other stand out tracks includes The Last Poets & The Hills Have Eyes.

Conway worked with a lot of different producers on here from the likes of your DJ Premier, Rockwilder & Hit Boy. On this project The Machine displays why not only is he the nicest in the Griselda camp but also one of the nicest in the game right now. To make the album even better he gives us a Deluxe version with even more bangers like Raw Oysters.

Favorite Song: Five On Us

Flee dropped so many dope projects this year but Five on Us, Still Trapped & Both Views stuck to me the most. This was a solid follow up to the original Loyalty & Trust.

W$G does a great job of not only picking beats but also features and song placement his album structuring is unfuckwitable. He also pairs artists together you wouldn’t expect like on “327” with Joey Badass & Tyler The Creator.

A Piece Of Mine – Bub Rock

When I wanna hear that pain & reality rap not that lyrical miracle … King Bub Rock it is. With an already solid catalog Bub continues to make good music. He makes something for every listener on every project he will give you street records & songs for the ladies Bub is an all around artist.

Grammy nominated album all that needs to be said. If you been following Gangsta Gibbs career over the years seeing him up for this award is big.

Creativity wise this album concept was dope. I loved how Eto gave this the “Carlito’s Way” feel. The fact he made a short film of it an used music videos & had Walberto actor Angel Salazar in it made it made the project special.

West Phillys own King Shampz told me personally this album was going to be fire when it dropped & he told no lies him & his brother Azzan is a powerful 1 2 punch. These two are in a league of their own Azzan’s production on here is a must listen.

Return Of The Oro – The Musalini

Adjust To The Game – Larry June

Larry June is like the mailman he always delivers you that smooth west coast summer vibe. June is easily one of the most consistent out right now. A lot of bangers on here like “You Can Get Rich” & “Matcha Wit Harry”.

Roc with the unexpected features like schoolboy Q, Action Bronson. The production was not what we are us to from Roc but I enjoyed it. I’m Roc Marci bias he can do no wrong in my eyes so we will leave it at that.

Nack is from another planet plain an simple. I enjoyed Superiors production to go along with Nack’s unique flow.

The Grotesque & The Beautiful – Teller Bank$

Favorite song: The Pride Of The Fallen

This album was deep Teller does a great job of painting his Pain on the Ed Glorious production.

Buckxz one of the most determined hardest working up & coming artists I know. Even through all the minor set backs he seems to persevere & keep coming back stronger with even better music every time around.

I’ve enjoyed the Noise Kandy Series as a whole. Rome is one of my favorite artists in this new underground renaissance. Minimal features but loaded with quotables.

The World Is Piff 2 – Jamal Gasol

This tape to me helped Jamal branch out an expand his fan base & PIFF brand in 2020. He has songs on here with Planet Asia, Jah Monte, Vic Spencer to name a few. Good music to smoke to right here. Angela Flowers is also super dope.

So many other albums could’ve been included.

Special shoutout to my favorite artist 38 Spesh for having a great year multiple production credits & ending the year with a perfect project in “Interstate 38” I would’ve added it to this list but felt it wouldn’t of been fair since it was so new. Overall I enjoyed it along with the “6 Shots” EP. Spesh still made this list a few times for albums he produced.

Check out the playlist below with a few songs from these artists!